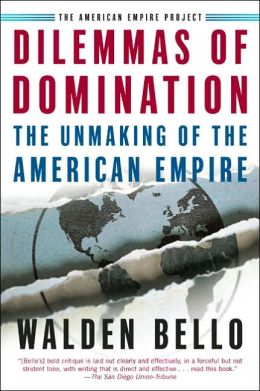 Dilemmas of Domination: The Unmaking of the American Empire

The empire seems unassailable, but the empire is weak – and precisely because of its imperial ambitions. Walden Bello dissects the dilemmas confronting America in its quest for global domination. Despite the enormity of the U.S. defence budget, American forces are already overextended – and will become more so as each local ‘victory‘ breeds simmering resistance. The empire faces looming economic breakdown, the result of its gargantuan military costs, record-breaking budget deficits, and exploitative trade and investment relations. On the political front, bitter disillusionment is spreading in response to America‘s failure to champion liberal democracy, crony capitalism and gross inequalities of income. Dilemmas of Domination reveals a not-too-distant future in which the empire‘s hidden weaknesses will yield fatal challenges to American supremacy.