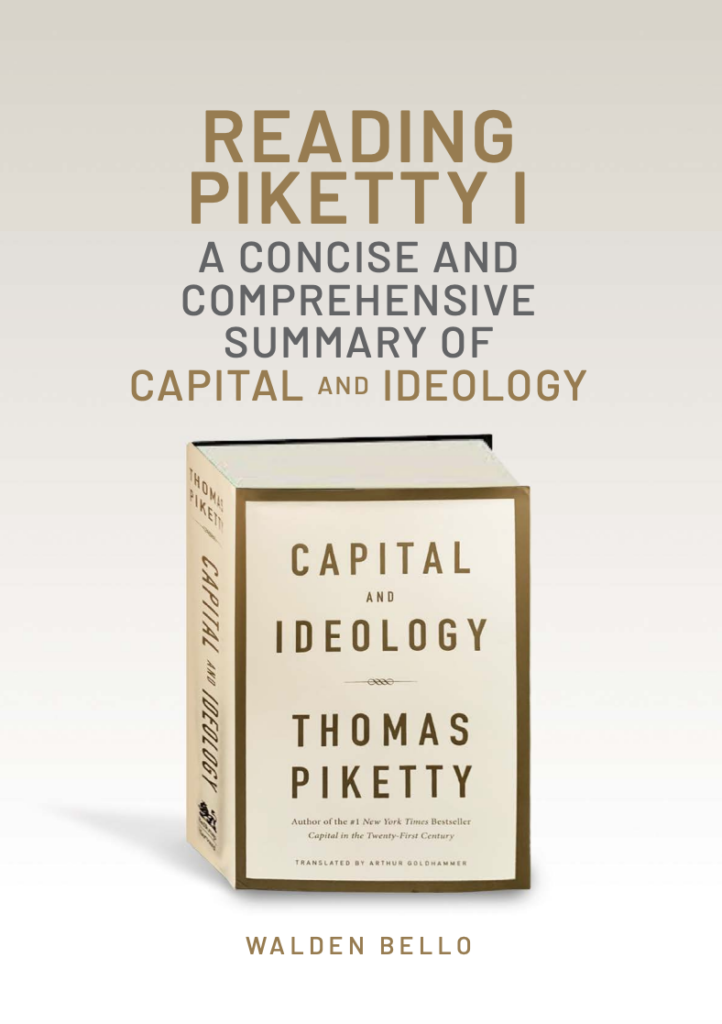 Reading Piketty I: A Concise and Comprehensive Summary of Capital and Ideology

In this summary, Walden Bello distills the key ideas and data contained in Thomas Piketty’s monumental work Capital and Ideology. The French economist deserves to be read by more people, but many have neither the time nor energy to work through this sprawling 1,042-page classic. This short volume is motivated by the conviction that Piketty cannot be left to specialists in social stratification or to Marxologists, since he has many valuable insights into past and present societies that are useful in activist efforts at societal transformation.
Most people’s understanding of Piketty has been derived from reviews or critiques of his work, so it often comes colored with the interpretations of these writers. Much of what has been written about his work has turned on the question of whether he is or is not a Marxist, which is unfortunate since, irrespective of whether or not he is a Marxist or socialist, people will find many important ideas and suggestions on how to build a more just society in his work. For this reason, Reading Piketty I is a straight summary containing all the key ideas and much of the empirical data in Capital and Ideology, with commentary kept to a minimum, being limited to an occasional friendly flagging of perceived omissions or buttressing of selected points. As often as possible, Piketty is quoted directly.

Focus on the Global South has its own perspective on Piketty, of course, but this will be unveiled in Reading Piketty II, which will be released later so as not to influence readers of Part I.

Crisis of early 20th century inequality regimes in the West; Crisis of reformed capitalism in the late 20th and early 21st centuries; Nineteenth century Europe: from ternary to ownership society; Pre-Independence India: a quarternary society; Traditional China: convergence with and divergence from the West; Slave and colonial societies; The Soviet Tragedy—From Cultural Revolution to “Capitalism with Chinese Characteristics”; Social nativism in Europe and the West; Social nativism in India; Piketty’s theory of wealth and income shares in a nutshell; The dynamics of change in inequality regimes; Participatory Socialism as a response to the crisis of neoliberalism.