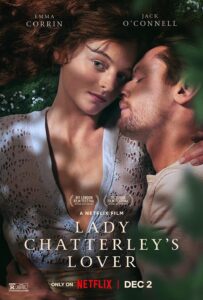 Not a substitute for the experience of reading a great novel, but this is probably as good as a film adaptation of D.H. Lawrence’s classic can get. Emma Corrin turns in a fine, nuanced performance as an upper class wife transitioning from caring for a war-injured husband to falling in love with their estate’s gamekeeper, played by Jack O’Connell, who pretty much sticks to Lawrence’s portrayal of him as moving from aloofness to passion. There are the obligatory scenes of lovemaking, but what the film does best is portraying how social conventions come crashing down on those who engage in cross-class affairs, subjecting those who violate class canons to cross-fire, both from above and from below.

One of the notable things about the film is that it does not neglect the third person in the triage, Lord Chatterley, played by Matthew Duckett, who is imprisoned by the class system that turns him from a sensitive officer who worries about the men he left behind in the front while on his honeymoon leave into a hard-hearted, tight-fisted parody of an impotent British ruling class that has squandered its “right to rule.”

This is film (and Lawrence) serving as a course on social classes and patriarchy, which goes to show that the best social analyses are often found in film and fiction than in dry social science texts.

In fact, this film hits very close to home, reminding one of the case of the still imprisoned Senator Leila de Lima, who was hustled to jail not by any credible evidence of participation in the drug trade but by the vicious whipping up of mob rule by the former president and his minions who portrayed her as engaging in cross-class love, in which, according to patriarchal Filipino norms, the upper class man can engage wantonly with lower class women, but never, never a woman from the upper classes with a man from the lower classes.