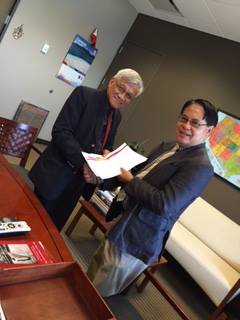 When I resigned from the House of Representatives last March in protest against President Aquino’s double standards in his good governance policy and his refusal to accept command responsibility for the Mamasapano tragedy, I thought I was saying “goodbye to all that.” I was looking forward to a quieter life devoted to researching and writing a book on one of my favorite subjects: the current crisis of the global capitalist economy

Over the last three months, however, an ever widening network of groups and individuals has snowballed into a movement to get me to run either for the presidency or the Senate. That draft has proven to be implacable and irresistible.

I have accepted their challenge to run for the Senate.

I am running to oppose a foreign policy that makes our poor country hostage to the machinations of aggressive superpowers. I am running to help liberate our economy from neoliberal policies imposed by a global capitalist system that has condemned our people to greater poverty and inequality even as it enriches our greedy elite and foreign corporations. I am running to end the criminal debt slavery, to which our sellout elite is complicit, that turns over 34 per cent of the annual government budget to insatiable foreign and domestic banks and creditors.

I am running on a platform that will, among others, promote security of tenure for workers; complete agrarian reform; promote and protect the rights of women, indigenous peoples, and the LGBT community; protect the rights and advance the interests of our millions of OFWs; create jobs and expand housing for the urban poor; expand educational opportunities for our youth instead of enriching the country’s greedy creditors; and provide decent, adequate, and functioning mass transit for commuters victimized by plundering private monopolies and bungling technocrats.

I am running as an independent because I am my own man.

What makes me different from most of the others running for the Senate and the presidency? My record. I have promised and delivered. I have been arrested and imprisoned. I have been consistent in my advocacies. I have called a spade a spade. I have gone to the extent of breaking the law in order to expose and destroy those forces that oppress our people. I have gone after those who sexually exploit and traffic our women. I broke publicly with a hypocritical president who refused to dismiss his corrupt cronies. I resigned from Congress rather than support an administration that had ceased to live up to the reform agenda for which it was voted to office and turned itself into a self-serving college fraternity.

My bid is supported by a broad civil society network, progressive organizations, and individuals, including OFWs, that came together over the last three months to convince me to run. I said I would not run unless I had proof they would go to hell, 24/7, for my candidacy against politics-as-usual. The reason I took so long to decide is I was waiting for proof they were willing to do this. I am now convinced they are. I am confident their their enthusiastic support will infect the electorate and carry this candidacy to victory. The conventional wisdom is that this independent candidacy has little chance of winning. We are out to disprove the conventional wisdom by revolutionizing electoral campaigning in the Philippines. The guiding slogan of our campaign is: “Never, never underestimate the Filipino people.”

Upon hearing of my candidacy, a friend from the media said, “May the force be with you.” Yes, I will definitely need all the Force I can get from the Filipino people in this uphill struggle against the Darth Vader of money, ambition, and brazen power that is traditional politics. But like Luke Skywalker, I am not one to walk away from a challenge.

To those who today control politics with their money, power, and ambition, this campaign says, “May you rot in hell.” We will prevail.