Why the son of a hated dictator won the Philippine elections

The fallout from the results 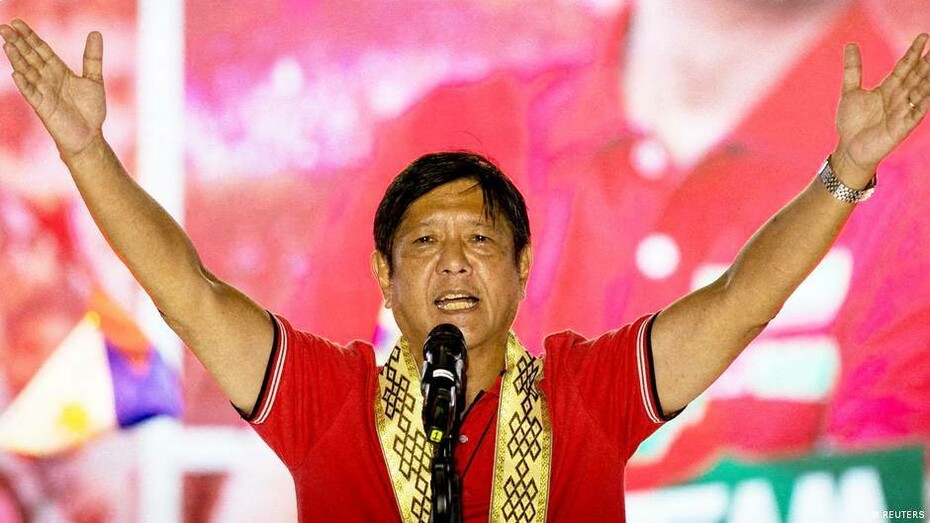 As a progressive activist, I’m dismayed at the election of Ferdinand Marcos Jr. by a landslide. But as a sociologist, I can understand why.

I am not referring to the malfunction, intended or non-intended, of one thousand plus voting machines. I am not alluding to the massive release of billions of pesos for vote-buying that made the 2022 elections one of the dirtiest in recent years. Nor do I have in mind the decade-long online campaign of disinformation that transmogrified the nightmare years of martial law into a “golden age.”

Undoubtedly, each of these factors played a role in the electoral result. But the 31 million-plus votes (or 59 percent of the electorate) is simply too massive to attribute to them, even were they to be combined. The truth is the Marcos victory was largely a democratic outcome in the narrow electoral sense, and the challenge for progressives is to understand why the runaway majority of the electorate voted to bring an unrepentant thieving family back to power after 36 years. How could democracy produce such a wayward outcome?

The truth is that no matter how slick or sophisticated the internet campaign was, it would have made little impact had there not been already a receptive audience for it. While the Marcos revisionist message also drew support from among the middle and upper classes, that audience was in absolute numbers largely a working-class (classes “D” and “E” in pollsters’ jargon). It was also largely a youth audience, more than half of whom were either small children during the late martial law period or born after the 1986 uprising that ousted Marcos, better known as the “EDSA Revolution.” That audience had no direct experience of the Marcos years. But what they had a direct experience of was the gap between the extravagant rhetoric of democratic restoration and a just and egalitarian future of the EDSA Uprising and the hard realities of continuing inequality and poverty and frustration of the last 36 years. That gap can be called the “hypocrisy gap”, and it is one that created greater and greater resentment every year that the EDSA establishment celebrated the uprising on February 25 or mourned the imposition of martial law on September 21.

A vote against the EDSA status quo?

Seen from this angle, the Marcos vote can be interpreted as being largely a protest vote that first surfaced in a dramatic fashion in the 2022 elections that propelled Rodrigo Duterte to the presidency. Though probably inchoate and diffuse at the level of conscious motivation, the vote for Duterte and the even larger vote for Marcos were propelled by widespread resentment at the persistence of gross inequality in a country where less than five percent of the population corners over 50 percent of the wealth. It was a protest against the extreme poverty that engulfs 25 percent of the people and the poverty, broadly defined, that has about 40 percent of them in its clutches.

Against the loss of decent jobs and livelihoods owing to the destruction of our manufacturing sector and our agriculture by the policies imposed on us by the World Bank, International Monetary Fund, World Trade Organization, and the United States. Against the despair and cynicism that engulf the youth of the working masses who grow up in a society where they learn that the only way to get a decent job that allows you to get ahead in life is to go abroad. Against the daily blows to one’s dignity inflicted by a rotten public transport system in a country where 95 percent of the population doesn’t own cars.

These are the conditions that most of the Class D and E Marcos voters experienced directly, not the horrors of the Marcos period, and their subjective resentment of them primed them for the seductive appeals of a return to a fictive “Golden Age.”

In the presidential elections, the full force of this resentment against the EDSA status quo was directed at Marcos’ main rival, Vice President Leni Robredo. Unfairly, since she is a woman of great personal integrity. The problem is that in the eyes of the marginalized and the poor that went for Marcos, she was not able to separate her image from its associations with the Liberal Party, the conservative neoliberal Makati Business Club, the family of the assassinated Benigno Aquino, Jr, the double standards on corruption that rendered Benigno Aquino III’s “kung walang korap walang mahirap” (“where there is no corruption, there is no poverty”) slogan as much as an object of ridicule as the color yellow, and, above all, with the devastating failure of the 36-year-old EDSA Republic to deliver.

The rhetoric of “good governance” may have resonated with Robredo’s middle class and elite base, but for the masa (masses) it smacked of the same old hypocrisy. Good governance or “tapat na papamalakad” sounded in their ears much like the Liberals’ painting themselves as the “gente decente” or “decent people” that led to their rout in the 2016 elections and the ascendancy of Rodrigo Duterte.

Moreover, the Marcos base was not a passive, inert mass. Fed with lies by the Marcos troll machinery, a very large number of them eagerly did battle on the internet with the Robredo camp, the media, historians, the left—with all those that dared to question their certainties. TV Patrol, 24 Oras, and other programs became sites whose comments sections they plastered with pro-Marcos propaganda, much of it memes either glorifying Marcos or unfairly satirizing Robredo.

This protest against the EDSA Republic had a generational component. Now, it’s not unusual that a new generation sets itself against that which the old generation holds dear. But it is usually the case that the younger generation rebels in the service of a vision of the future, of a more just order of things. What was unusual with the millennial and Gen Z generations of the working masses was that they were not inspired by a vision of the future but by a fabricated image of the past, the persuasiveness of which was enhanced by what sociologists like Nicole Curato have called the “toxic positivity” of Marcos Junior’s online persona, where he was reconstructed by cyber surgery to come across as a normal, indeed benign, fellow who simply wanted the best for everyone.

Vacuum on the left

Now, from the French Revolution to the Philippine Revolution to the Chinese Revolution to the global anti-war movement of the 1960s to the First Quarter Storm, it was the left that usually offered the vision that youth latched on to express their generational rebellion. Unfortunately, in the case of the Philippines, the left has simply been unable to offer that dream of a future order worth fighting for. Ever since it failed to influence the course of events in 1986 by assuming the role of a bystander during the EDSA Uprising, the left has failed to recapture the dynamism that made it so attractive to youth during martial law.

Its deliberate sidelining during the EDSA Uprising led to the splintering of the progressive movement in the early 1990s. Moreover, socialism, which had served as the beacon for generations since the late 19th century, was badly tarnished by the collapse of the centralized socialist bureaucracies in Eastern Europe. But perhaps most damaging was a failure of political imagination. The left failed to offer an attractive alternative to the neoliberal order that reigned from the late 1980s on, with its presence on the national scene being reduced to a voice yapping at the failures and abuses of successive administrations.

This failure of vision was coupled with the incapacity to come up with a discourse that would capture and express people’s deepest needs, with its continued reliance on stilted, formulaic phrases from the 1970s that simply came across as noise in the new era. There was also the continuing influence of a “vanguardist” mass organizing strategy that might have been appropriate under a dictatorship but was disconnected from people’s desire for genuine participation in a more open democratic system. The times called for Gramsci but much of the left stuck with Lenin.

This vanguardism in mass organizing was coupled, paradoxically, with an electoral strategy that deemphasized class rhetoric, threw overboard practically all references to socialism, and satisfied itself with being a mini partner in elections with contending factions of the capitalist elite. To be sure, one cannot overemphasize significant state repression exercised against some sectors of the left, but what was decisive was the perception that the left was irrelevant, or worse, a nuisance by large sectors of the population as memories of its heroic role during martial law faded away.

Nature abhors a vacuum, as they say, and when it came to capturing the generational energy of working-class youth in the late EDSA period, that vacuum was filled by the Marcos revisionist myth.

This is the history against which the 2016 elections unfolded. But the great thing about history is that it is open-ended and to a great extent indeterminate. As one philosopher observed, women and men make history but not under conditions of their own choosing. The ruling elite may strive for control of where society is headed, but this is often frustrated by the emergence of contradictions that create the space for the subordinate sectors to intervene and influence the direction of history.

The Marcos-Duterte camp is currently gloating behind the façade of calls for “burying the hatchet,” and we should expect this froth to overflow in the period leading up to June 30. Beginning that date, when it formally assumes power, reality will catch up with this gang. The Marcos-Duterte alliance, or what is now the circle of multiple political dynasties around the Marcos-Duterte axis, is a connivance of convenience among powerful families, and like most alliances of this type, that is built purely on the sharing of spoils, it will prove to be very unstable. One would not be surprised if, after a year, the Marcoses and Duterte’s will be at each other’s throats, something that might be foreshadowed by Vice-president elect Sara Duterte’s being denied the powerful post of chief of the Department of National Defense and given instead the relatively powerless position of DepEd secretary.

This inevitable struggle for power will unfold against a backdrop of millions realizing they have not been led to the promised land of milk and honey and the 20 pesos per kilo of rice, disarray in a business sector that still has memories of the crony capitalism of the Marcos Sr years, and splits in a military that will have to work overtime to contain the instability triggered by the return of a controversial dynasty that it had itself—or a faction of it—contributed to overthrow in 1986. But probably the most important element in this volatile scenario is a large sector, indeed millions, who are determined not to provide the slightest legitimacy to a gang that has cheated and lied and stolen and bribed their way to power.

In voting for Marcos, 31 million people voted for six years of instability. That is unfortunate. But that is also the silver lining in this otherwise bleak scenario. One of the world’s most successful organizers of change observed, “There is great disorder under the Heavens but, hey guys, the situation is excellent.” The inevitable crises of the Marcos-Duterte regime offer opportunities to organize for an alternative future, and this time we progressives better get it right.

Originally published in meer: Why the son of a hated dictator won the Philippine elections | Meer